Electropolishing is a great way to remove hydrogen from stainless steel, which is important in counteracting metal fatigue due to hydrogen embrittlement. This makes it difficult for bacteria to grow in an environment that is free from hydrogen.

Electropolishing removes the impurities on the metals surface, while producing a uniform finish that is occlusion free and  microscopically smooth. Not only does it remove surface impurities it drawls out impurities hidden inside such as; iron, carbon, oxidation from welding and other discolorations from various other processes. By drawing out the impurities you prevent corrosion and rust. Metal corrosion is greatly enhanced the electropolishing process.Electropolishing smooths the metal surface by attacking the high points, "peaks" first. A smoother surface means less area for particulates to become trapped.

During the electropolishing process the metal is processed anodically in a concentrated acid or alkaline solution. With the application of current, a film forms on the metal's surface, allowing metal ions to diffuse through the film. The surface is then resealed, eliminating any microscopic pits or pores. As a bonus, the hydrogen is virtually removed, making the metal sanitized, which is beneficial for the food, medical and pharmaceutical industries, since hydrogen allows anaerobic bacteria to breed. Without the pores or pits, elements cannot enter the surface to allow for bacterial growth or rusting.

Purification: As mentioned previously, electropolishing restricts bacteria growth by removing hydrogen throughout the metal. Unlike a coating, an electropolished surface cannot flake off or chip, which is important for the food industries,  pharmaceutical processing, high vacuum assemblies and pure gas/water systems, such as reverse osmosis. Electropolishing also removes free iron which cause metals to rust. By removing the free iron and adding the hard chromium layer electropolishing leaves behind you are left with corrosion resistant alloys.

Adhesion: Electropolishing improves the adhesion of paint, adhesives or plasma. Oxides oil corrosion and organic debris on the metal surface make adhesion difficult. After electropolishing, the bonding ability during welding or soldering is improved greatly, do to the restriction of outgassing once impurities are removed.

Cosmetic Benefits: The electropolishing process results in the brightening of stainless steel. As mentioned before the surface is resealed leaving a chromium rich layer which gives the illusion of being chrome plated. 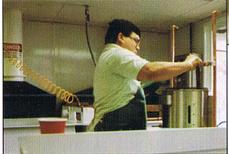 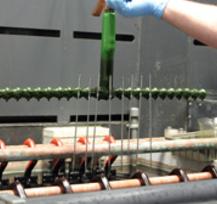 A Division of Lakin Industries